As 2012 comes to an end and 2013 is upon us like many others I have been doing a lot of reflecting.
2012 was a decent year. I know at the end of the year many are ready for the year to end and to start a new one. There have been some crappy things that have happened this year and there have been some good things. Nothing super major on either end.
For the past couple of years I have been focusing on my relationship with my grandpa, my dad’s dad, who is 91.
And I feel like 2012 was the year I became a winner with my grandpa. I call my grandpa regularly, occasionally write and whenever I am in town visit at least once or twice. 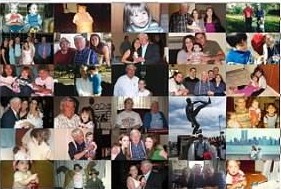 This is a shot of the Grandpa collage I made with shots of all of us grandkids, one great and a shot each of his kids.

In June my grandpa had to have surgery where he had a tumor removed from his colon. I decided that it was important for me to go home to be there for my grandpa, my dad and me.
I spent as much time with my grandpa before the surgery and after. He came through the surgery like a rock star!
I was at the hospital all day the day of surgery, back that night for a visit and multiple visits each day while I was in town.
The most exciting thing I encountered that week was helping my cousin Alex FaceTime (video conference on my phone) with our grandpa while Grandpa was in the hospital in Tucson and Alex was in Austin.
Thank you to technology and Apple for making that opportunity possible.
I feel like finally in 2012 I became an adult, a real-live grown up.

Newer
Try something new &amp; quit yer complanin&#039; in January&#039;s Monthly Challenge Older
Back to life, back to reality